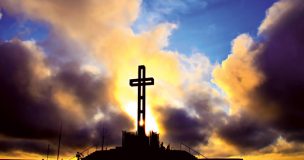 Having expressed his thirst and drunk sour wine, fulfilling Psalm 22 and 69, Jesus now utters his penultimate word: “It is finished.”

The English is ambiguous. One could take it to mean: “It’s over”, “I can take it no more,” or even “I give up.” But the Greek means none of these things. It’s a far more definite word: “It is completed!”

Repeatedly through John’s gospel, Jesus has spoken about his commitment to God’s mission. To his disciples he said: “My food is to do the will of him who sent me and to finish his work” (John 4:34). To the Jewish leaders he said: “My Father is always at his work… and I too am working… the Son can do only what he sees his Father doing.” (John 5:19) And in one of his final prayers, he said: “I have brought you glory on earth by finishing the work you gave me to do. And now, Father, glorify me in your presence with the glory I had with you before the world began” (John 17:4-5).

Jesus understood that all of his life and work was building to this point. He’d been obedient in everything his Father had asked of him, and now he knew that all work was completed. It was time for him to be glorified.

But his words have a broader meaning as well. For it’s not only Jesus’ life and work that is brought to completion, but the whole story of Scripture.

The Old Testament law and sacrificial system were designed to help people atone for their sins through offering sacrifices. But there was a problem with the system; namely that it could not actually deal with the problem of sin. Sacrifices had to be offered over and over, which was proof of their ineffectiveness.

Every time someone sinned, they would have to repeat the process of selecting a perfect animal and bringing it to be sacrificed. So worshippers were left feeling constantly guilty, never sure they’d done enough. And every time the annual sacrifices came round, it would be another reminder of their failure.

‘The law is only a shadow of the good things that are coming – not the realities themselves. For this reason it can never, by the same sacrifices repeated endlessly year after year, make perfect those who draw near to worship. Otherwise, would they not have stopped being offered? For the worshippers would have been cleansed once for all, and would no longer have felt guilty for their sins. But those sacrifices are an annual reminder of sins. It is impossible for the blood of bulls and goats to take away sins’ (Hebrews 10:1-4).

So if the sacrificial system was unable to deal with sin and guilt, what was its purpose? It pointed to what the death of Jesus was uniquely able to do. Hebrews continues:

‘Day after day every priest stands and performs his religious duties; again and again he offers the same sacrifices, which can never take away sins. But when this priest had offered for all time one sacrifice for sins, he sat down at the right hand of God, and since that time he waits for his enemies to be made his footstool. For by one sacrifice he has made perfect forever those who are being made holy’ (Hebrews 10:11-14).

As Jesus spoke his sixth word, he spoke it over all of the Old Testament law. “It is completed.”

As we reflect on his sixth word today, allow him to speak it over you.

Perhaps you read this and think ‘it doesn’t feel very finished!’ There are areas of our lives that still feel unholy and imperfect. Just think about that verse again:

‘By one sacrifice he has made perfect (past tense – it’s already done) forever (it’s irrevocable) those who are being made holy (present continuous tense – it is happening now and it will continue to happen).’

Through Jesus’ once-and-for-all sacrifice, you have been made holy, and you will continue to be made holy. Forever.

Lord Jesus,
Thank you that through your death on the cross ‘it is finished.’
Shame is finished.
Guilt is finished.
Fear is finished.
Where I sometimes feel unfinished,
Would you help me to trust in your once-and-for-all sacrifice,
Knowing that you have made me holy,
And will continue to make me holy,
Until you come again.
Amen.

If you find yourself with extra time today, why not listen to the recordings from Theology Matters: An Introduction to Hebrews. And if there are areas where you could do with help, why not explore the STEPS course, or get in touch with the Pastoral Support Team.