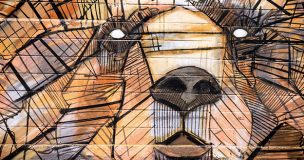 My Mum is one of my closest friends. She is friendly, funny and kind. At first, however, my Mum can seem retiring and shy. She isn’t someone who asserts herself, with one noticeable exception: if someone hurt or threatened her children, she would go into a mode that I like to call “Mama Bear.”

I experienced this Mama Bear mode when I was child. When I was hurt, when I was a victim to injustice, my otherwise diffident and gentle Mum would suddenly become fierce on my behalf. There would be a glint in her eye, a purpose to her tread, an edge to her voice. I would watch in awe as my Mum fought on my behalf. You hurt the cubs, you face the roar of Mama Bear.

One of the images that the Bible uses to describe God’s stance towards us is that of a loving parent; from the Father calling out to his unruly son (Hosea 11: 1-11) to the nursing mother with the innate, physiological response to the cries of her newborn (Isaiah 49:15). From Jesus, wanting to tuck an entire city of people under his wings (Matthew 23:37), to the Father running to his disgraced and disgraceful youngest child (Luke 15:11-32). Then the metaphor becomes a reality: Jesus reveals that just as he has always been the eternal Son, God has always been the eternal Father and he will go to extraordinary lengths to bring his wayward children safely back into his loving arms.

It is therefore unsurprising that the Bible speaks at length about justice. From the outset, God’s people were called to build a society where the vulnerable were nurtured and protected (more on that story later). When this mandate was not met, God confronted his people. The cries of the orphan, the widow, the foreigner and the poor touch the Father’s heart. When his children are hurting, God the Father roars.

As it was then, so it is now. Did you know that the annual revenue from human trafficking is higher than the combined profits of Nike, Google and Starbucks? Did you know that an estimated 10,000 children have disappeared in Europe after fleeing the Syrian civil war? Doesn’t it break your heart? Doesn’t it make you want to roar?

At the ChristChurch London Central service, we have started a connect group to ask the question: how do we, children of the God of Justice, respond to these needs? What can we do? We would like to invite you to join us.

Perhaps you’re already engaging in social justice, already answering the roar. If you are, then we are with you, and we’re sorry it’s taken us so long to catch up. Help us learn from you, let us pray for you, support you and cheer you on. If you, like us, can see the injustice and know that you are called to engage with this need and don’t know what to do, welcome! We will be organising events that will help us learn, pray and fundraise for organisations such as IJM, who work to rescue and protect the poor from human trafficking. If social justice is not on your radar, can we encourage you to come along, to find out more and to let your heart be moved? Wherever you are with this, can we ask you: will you roar with us? Will you unleash your Mama Bear?

If you would like to support our find out more about IJM then join us for a night of comedy and music on the 5th Aug at our open mic night. Find out more.