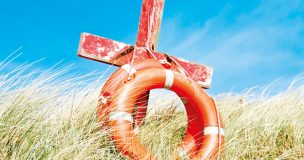 ‘Two other men, both criminals, were also led out with him to be executed. When they came to the place called the Skull, they crucified him there, along with the criminals – one on his right, the other on his left… One of the criminals who hung there hurled insults at him: “Aren’t you the Messiah? Save yourself and us!” But the other criminal rebuked him. “Don’t you fear God,” he said, “since you are under the same sentence?  We are punished justly, for we are getting what our deeds deserve. But this man has done nothing wrong.” Then he said, “Jesus, remember me when you come into your kingdom.” Jesus answered him, “Truly I tell you, today you will be with me in paradise.”’ (Luke 23:32-33, 39-43)

Each of the gospel accounts includes different details about the events of Good Friday. The accounts are not at all contradictory, but actually complement each other – together painting a full picture of that horrific day.

It’s traditional to refer to these men as ‘thieves’, but they were no petty criminals. Crucifixion was such a barbaric form of execution that it was reserved for the vilest offenders in society; particularly for revolutionaries who dared stand up against the power of Rome. This was the crime of Barabbas, who had taken part in an uprising and had been threatened with the death penalty (John 18:40).

So Jesus is crucified between two revolutionaries, sharing their fate, though he is innocent of their crime. The responses of the criminals couldn’t be more different.

On the one hand is a man so unable to see beyond the ugliness of the situation, that he cannot possibly believe Jesus is who he claimed to be. Jesus was a failed revolutionary, and nothing more! So the first criminal died as he lived, spewing forth violent curses.

On the other hand is a man who has realised the futility of his revolutionary ways and confessed his crime. Perhaps he heard Jesus’ words, “Father forgive them”, (v34) and found himself strangely moved; such that he was able to perceive a glimpse of beauty where his companion saw only ugliness.

So in humility the second criminal exchanges his kingdom aspirations for those of Jesus, and asks: “remember me when you come into your kingdom” (v42).

And with his second word from the cross, Jesus promises Salvation: “Truly I tell you, today you will be with me in paradise” (v43).

Luke presents this scenario in such a way as to invite us to see ourselves in the story. Which criminal do you most identify with? When you look at the cross do you see only the shame of Jesus and conclude that he was a powerless failure? Or do you find yourself moved by his strength of forgiveness and perceive a glimpse of beauty in amidst the horror?

Are you living for a kingdom of your own making? Or are you pursuing the kingdom of God? And are you willing to lay down your own kingdom aspirations for Jesus’ promise of Paradise?

Lord Jesus,
Thank you that you numbered yourself among the transgressors,
To bring even the most distant people into your Paradise.
I recognise the ways I have failed to pursue your Kingdom,
And instead pursued a kingdom of my own.
I surrender my kingdom aspirations for yours,
And ask that you would use me for your glory.
Amen

If you find yourself with extra time today, read this reflection, Dead Seed. And for more about Jesus’ promise of Paradise and eternal life, check out Tom Wright’s book Surprised by Hope.