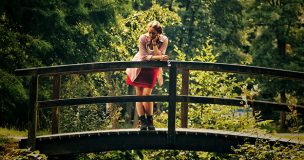 I’ve been staring at Rembrandt’s masterpiece, ‘The Return of the Prodigal Son’ a lot recently. It was one of his final works, based on Jesus’ famous parable in Luke 15. I’m no expert, but I think it’s one of his best. Giving just one painting such focused attention has required more concentration than I expected. I suppose I shouldn’t be surprised. According to one study, museum-goers spend an average of just 17 measly seconds looking at a painting. That’s how it normally goes for me – hurriedly racing from one exhibit to another, missing so much along the way – like the woman, faintly portrayed in the background. I’ve seen the painting dozens of times, but only just noticed her. She’s likely the prodigal’s mother, based on Rembrandt’s earlier drawings. What’s she thinking? How is she feeling? Why is she in the shadows? Does she represent me: staring with compassion from afar at the brokenness of our world (racial divides, social inequality, poverty and injustice) rather than running headlong to embrace it? She was there all the time. I just didn’t notice.

I’ve been mulling over the power of stopping and staring. In 2012, the artist, Marina Abramovic, participated in an exhibit called ‘The Artist is Present.’ It was a very simple concept. Marina sat on a plain, wooden chair in front of a table, and one by one visitors would sit opposite her. All she did was stare silently into their eyes. She didn’t speak, nor gesture. She just stared. Five minutes. Ten minutes. Just staring. People often queued for hours for their opportunity to stare back. The results surprised nearly everyone. Every single day people started weeping. Men, women, children: many were pictured with tears rolling down their cheeks. One New Yorker described it as a rare opportunity to connect with another human being.

Abramovic said, ‘I gazed into the eyes of many people who were carrying so much pain inside that I could immediately see and feel it. I became a mirror for them of their own emotions.’

Life races by so quickly, most of us never stop and stare, not even at our own lives. I’m reminded by the words by the philosopher, Francis Schaeffer, as soberly relevant today as when he wrote them in the 1970s:

‘People today are afraid to be alone. This fear is a dominant mark upon our society. Many now ceaselessly sit in the cinema or read novels about other people’s lives or watch dramas. Why? Simply to avoid facing their own existence. Many of us can sit in front of the television and, except on rare occasions, not face our own private life. Entertainment so fills every cranny of our culture we can easily escape thinking. No one seems to want (and no one can find) a place for quiet–because when you are quiet, you have to face reality. But many in the present generation dare not do, so they fill their lives with entertainment, even if it is only noise.’ (From No Little People by Francis Schaeffer)

The statistics on how the media robs us of silent contemplation are well documented. The average social media user receives approximately 285 pieces of content per day, equating to about 54,000 words and 443 minutes of video. Facebook alone occupies 50 minutes of our time each day, and demands ever more. Sixteen minutes of every hour are spent on social media platforms. In the time spent on social media each year, we could read 200 books. Most alarmingly, one study suggested that people prefer receiving electric shocks than being alone with their thoughts.

Looks like Pascal had it right: ‘All of man’s troubles stem from his inability to sit quietly in a room alone.’

There’s much to be said for stopping and staring. Yale Professor, Dr Irwin Braverman noticed doctors in training didn’t always fully or accurately describe what they observed in their patients, increasingly relying on technology to make a diagnosis – so he sat them in front of a painting for 15 minutes. The simple process of focused attention, stopping and staring, significantly improved the quality of their work. Taking time for silence has been shown to restore the nervous system, sustain energy and condition our minds to be more responsive to the increasingly complex world in which we live and work.

If stopping and staring improves our work, deepens our connections with others, and helps us notice things we’d otherwise miss, then it figures that some sacred slowness would assist our spiritual lives too. The book of James encourages us to look intently at scripture in order to find blessing. Isaiah warns that we can avoid the folly of living for idols (money, power, pleasure), if we just stop and think. The Psalmists* regularly encourage the practice of meditation: staring at the text and thinking about what it’s saying.

The Dutch priest, and former Yale and Harvard professor, Henri Nouwen, said, ‘Without solitude, it is virtually impossible to live a spiritual life.’

Time alone. Stopping and staring. Maybe it’s the key to living well in our information-overloaded age.

Nouwen knew about Rembrandt’s painting of Luke 15, too. He visited the State Hermitage Museum and stared at it for hours. The result was a very moving book of the same title. I’ll leave you with a quote from the work, the fruit of staring at a painting. Then maybe go and look deeply at something, and see what happens.

‘Since my visit to the Hermitage, I had become more aware of the four figures, two women and two men, who stood around the luminous space where the father welcomed his returning son. Their way of looking leaves you wondering how they think or feel about what they are watching. These bystanders, or observers, allow for all sorts of interpretations. As I reflect on my own journey, I become more and more aware of how long I have played the role of observer. For years I had instructed students on the different aspects of the spiritual life, trying to help them see the importance of living it. But had I, myself, really ever dared to step into the center, kneel down, and let myself be held by a forgiving God?’