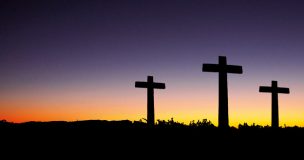 ‘When they came to the place called the Skull, they crucified him there, along with the criminals – one on his right, the other on his left. Jesus said, “Father, forgive them, for they do not know what they are doing.”’ (Luke 23:33-34)

Jesus’ first word from the cross is an unexpected one. In the midst of his agony, his mind goes immediately towards those who put him there. And his cry to God on their behalf hints that there is a deep mystery behind these bloody events.

Jesus’ accusers knew exactly what they were doing. They had wanted him dead for some time, and had begun plotting about how to achieve it (Matt 26:3-5, 14-16; Mark 14:1-2, 10-11; Luke 22:1-6). They bribed one of Jesus’ disciples, orchestrated his arrest, and fabricated evidence in order to incriminate him before the Romans. It was a cruel and calculated plan.

Jesus’ executors knew exactly what they were doing. The Romans had made an art-form out of crucifixion. It was a method of execution so brutal and so precise; every element of the process was designed to inflict the greatest pain upon the victim. It was accompanied by torture and mockery: stripping, beating, spitting, whipping (Matthew 27:27-34; Mark 15:16-23). Victims were elevated and left to die by the roadside, as a shameful public display and a deterrent to other potential revolutionaries.

Jesus’ mockers knew exactly what they were doing. Crucifixion was sadly commonplace in Roman-occupied Israel, and everyone would have witnessed it at some point in their lives. Even from childhood, Jesus would have seen crucifixions; the Roman Governor Varus crucified 2,000 Jewish people in 4 AD, just 3.5 miles from Jesus’ hometown of Nazareth. It was a public spectacle, which invited passers-by to unleash their scorn and mockery. It had become so normalised that many people had become numb to the brutality of it. So from the earliest days, the church reflected on a verse from Lamentations as if it were speaking to the events of Good Friday:

“Is it nothing to you, all you who pass by? Look around and see. Is any suffering like my suffering that was inflicted on me?” (Lamentations 1:12)

Everyone knew exactly what they were doing. And yet, Jesus cried out, “Father, forgive them, for they do not know what they are doing” (Luke 23:24).

There is a deep mystery to the events of Easter, in which those who consider themselves powerful are shown to be powerless, and the one who is at the mercy of others dispenses mercy to his murderers.

In 1 Corinthians, Paul describes the gospel – the good news of salvation – as a mystery planned from before the beginning of time, hidden for ages, and revealed through the events of Easter. He says that ‘none of the rulers of this age understood it, for if they had, they would not have crucified the Lord of glory’ (1 Corinthians 2:8).

As accusers, executors, and mockers lined up to do their worst to Jesus, they had no idea that there was a deeper power at work, which would soon overturn their evil schemes. They knew not what they did, because they knew not what God was capable of.

And as Jesus endured their mockery, their scorn and their violence, he had the strength to extend forgiveness to them. If Jesus could pardon the very ones who colluded against him, even as they drove nails through his limbs, there is nothing we could ever do that would put us beyond the reach of his prayers.

Father forgive us,
For so often, we know not what we do.
Thank you that you endured the shame of the cross,
And have revealed to us the mysteries of your gospel.
As we enjoy the forgiveness you extend to us,
Would you empower us to extend that same forgiveness to others.
Amen.

If you find yourself with extra time today, why not listen to this talk on the weakness and wisdom of the cross, from 1 Corinthians 1, or read this reflection, Who Killed Jesus?