Thursday: The Sheep and the Shepherd 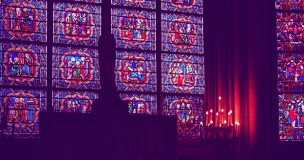 Try to picture the trial of Jesus. The sights, the sounds, the emotions. I imagine a bustling scene: crowds pushing to get close, to see what the outcome would be. People shouting and jeering. Officials calling for order. I imagine it being a loud and aggressive occasion.

But in the midst of the commotion, there is an ominous silence that speaks volumes.

The silence of Jesus. No self-justification. At the greatest miscarriage of justice the world had ever seen, the sinless one ‘did not open his mouth’. He didn’t defend himself, or accuse others, or reel of lists of reasons for his innocence.

The silence of the crowd. Whereas only days before, the multitudes had cheered as Jesus entered Jerusalem, now, ‘who of his generation protested?’ Nobody stood up for him. Instead they spoke against him.

At this moment of pressure, Jesus didn’t rant or complain. He showed such incredible composure as he stood before his accusers with nobody coming to his defence. As Peter writes, ‘When they hurled their insults at him, he did not retaliate; when he suffered, he made no threats. Instead, he entrusted himself to him who judges justly’ (1 Peter 2:23)

Isaiah draws a comparison with a sheep; a simple animal who approaches the shearer and slaughterer with the same level of innocent, oblivious silence. The sheep has no idea what to expect and therefore puts up no fight. But Jesus knew full well what was about to take place. Yet in the face of death, he stayed silent.

How could Jesus keep such an astonishing level of composure? The answer is that he was not only a sheep, but also the shepherd.

Jesus understood that God had a plan to use his death to rescue the world, and he was willing to lay his own life down for the good of others. He ‘entrusted himself to him who judges justly’ knowing that God could overturn even the most horrendous verdict.

Jesus’ silent trust is an astonishing example of self-restraint and faith in the goodness of God. And it’s also a powerful reminder of where true authority lies. He faced his accusers, knowing that they could not lay a finger on him if it were not permitted by God (John 19:10-11).

Isaiah goes on to describe us all as sheep in need of rescue (53:6). Can you think of any better shepherd to follow than the one who shows such strength, authority and self-giving love?

Would you empower me to trust you when I feel wronged or under pressure. And would you lead me to safe pastures where I can find nourishment and rest.

If you find yourself with extra time today, you may want to read 1 Peter 2:21-25 and consider how Jesus’ experience serves as ‘an example’ so that we ‘should follow in his steps’.

You may also like this post from 2014: Who Killed Jesus? and if you have time, why not listen to one of these talks on John 10 or Psalm 23.