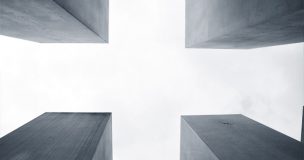 It was the Tuesday of Passover week. Thousands of worshippers continued to flock to the Temple to offer their sacrifices. But today there was an unusual sense of tension in the air.

Just yesterday, Jesus had brought the Temple to a halt, as he threw over the traders’ tables. Today he continued to cause a commotion, as he told subversive stories that challenged the religious leaders.

He told a story about a vineyard, which was a common Old Testament metaphor for Israel (Isaiah 5:1-7). The people who had instructed to care for the vineyard, had failed to, and it had ceased to bear good fruit. So the owner sent messenger after messenger to appeal to the tenants of the vineyard, but each time they rejected the messengers, treating them more and more violently. Finally, the owner sent his very own son, but the tenants beat and killed him.

As Jesus’ story hit its unexpected climax, you could have heard a pin drop. Most of the listeners would have been shocked by this dark twist. But the religious leaders felt sick to their stomachs as they knew that Jesus was directing his story towards them. For weeks they had been seeking a way to kill Jesus, and now through this story he was exposing their plan and criticising the way they were caring for God’s nation, whilst also claiming to be the Son of God.

Jesus turned to the leaders and quoted a famous psalm:

‘The stone the builders rejected
has become the cornerstone;
the Lord has done this,
and it is marvellous in our eyes.’ (Psalm 118:22-23)

Jesus knew full well how this story would play out. He knew his teaching was falling on deaf ears, and that his warnings would have no effect. The leaders had made up their minds to kill God’s messenger, and nothing would dissuade them.

But what they didn’t realise was that God had planned a surprising reversal. The very same one these leaders were rejecting would become the cornerstone of God’s new creation. The temple, the sacrifices, the priesthood – all of it had become compromised and needed to be replaced. And through Jesus, God would build a new structure, in which everyone who accepts Jesus gets to play a part.

‘As [we] come to him, the living Stone – rejected by humans but chosen by God and precious to him – [we] also, like living stones, are being built into a spiritual house to be a holy priesthood, offering spiritual sacrifices acceptable to God through Jesus Christ’ (1 Peter 2:4-5)