Walker with Dinosaurs: On Creation and the BBC 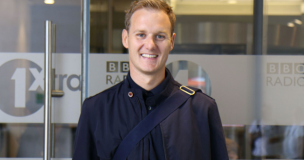 Few things make me involuntarily spit out my coffee. The taste of bad coffee is one. Reading this article was a second.

The BBC has announced that after 15 years, Bill Turnbull is giving up his seat on the BBC Breakfast sofa. His replacement is sports presenter Dan Walker.

Dan is well known for having presented Football Focus, as well as working on BBC Radio 5 Live, Final Score, and Match of the Day. Dan is also a Christian. And this appears to be a problem for some people, most notably Rupert Myers, whose piece in the Telegraph yesterday called into question Dan’s ability to present the news with accuracy and objectivity, given his views on creation.

‘A belief in creationism may be a religious belief, and we must allow generous margins to the holding of such beliefs, but creationism falls beyond the spectrum. It should be consigned to the bin of unreasonable, untenable fact-allergic nonsense. Creationists cannot be trusted to report objectively, or to interact reasonably with their interviewees and with the public. Putting a creationist at the helm of news broadcasting without any explanation as to what the BBC has done to ensure that creationism or the beliefs underpinning it will not form any aspect of the show’s output is an affront to reason, science and logic.’

But the reason I found Myers’ article so frustrating was its complete lack of nuance and its unwillingness to engage with the breadth of Christian belief. Since Myers claims to be a Christian, I would hope he might give a fellow believer the courtesy of taking the time to understand his views, and to express his disagreement in a respectful tone. Instead, the article is peppered with snarky putdowns and irrelevant photographs from a Young Earth Creationist theme park.

Now, I don’t know Dan Walker from Adam (no creationist pun intended). For all I know he may believe the Earth is considerably younger than I happen to. But as Hitchens points out, Dan’s beliefs aren’t publicly known at the moment, and the statement of his spokesperson that ‘Dan is a Christian who believes that God is behind creation’ is shared by countless people who are otherwise considered rational and sensible human beings.

The impression Myers gives is that there is no middle ground between literalism and scientism, and anyone who dares to invoke a Creator should be considered a Young Earth Creationist, and thus consigned to the loony bin.

This is simply not the case. In reality there are a great number of scientists who find no tension between their work and their belief in a Creator. Yet Myers has made no attempt to distinguish between the different views of creation, and as such has written what I consider to be an irresponsible representation of Christian belief.

If I may pose Myers’ question in another way:

‘Can the public trust a reporter to convey the news with objectivity, when he demonstrates such rudeness of tone and wilful ignorance of the breadth of Christian belief?’

Or indeed, since journalism is only one part of Myers’ career:

‘Can the public trust a barrister to uphold justice with objectivity, when he attacks straw men, makes no discernible attempt to educate himself in basic facts, and refuses to engage with the argument in its strongest possible form?’

Questions about science, faith and the age of the Earth are big and important ones, and deserve to be discussed with patience and respect, rather than being flippantly brushed aside with some vague reference to ‘science’. If in time Dan is shown to be unable to report the news with impartiality, then by all means criticise his work. But let’s not make sweeping judgments and write him off on the basis of things he may not even believe.

My invitation to Myers, and indeed anyone who is interested in such questions, is to explore them with openness and, in the Socratic tradition, ‘follow the argument wherever it leads.’

Here’s one way you may wish to do this. It’s a few months away, but on Sunday 19 June, we are thrilled to have Professor Ard Louis as our guest speaker at ChristChurch London. Ard is a Professor of Theoretical Physics at the University of Oxford, an associate of the Faraday Institute for Science and Religion, and a former Royal Society University Research Fellow. He is a widely respected scientist and an engaging speaker who will help us address the question of whether science has made belief in God obsolete. You would be more than welcome to join us.

And in the meantime, why not check out some of the following resources, to help you engage with this important topic:

Prof. Alister McGrath has written some great books on science, faith and the New Atheism. Check out any of those, or this talk from his visit to ChristChurch London in 2013.

Similarly, you may enjoy the work of Prof. John Lennox or Prof. John Polkinghorne, both of whom have addressed various issues about science and faith. And Dr. Francis Collins, who led the Human Genome Project, and now serves as the Director of the National Institutes of Health in the USA, has written a brilliant book entitled The Language of God.

The BioLogos website is full of helpful resources on creation and evolution. It offers critiques of Young Earth Creationism, Intelligent Design, and Atheistic Evolutionism, and presents a form of Evolutionary Creationism that is scientifically credible, and compatible with Christian faith.

Similarly, you may enjoy the Test of Faith project, which has produced many interviews with leading scientists on how faith has furthered rather than hindered their work.