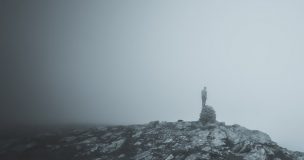 One of the most striking things about the accounts of Jesus’ crucifixion is that although they document the abuse he suffered – the mockery, beating, scourging, and execution – there is little focus on his physical agony. The greatest sense of distress seems to come from what was happening to him at an emotional, psychological and spiritual level.

Years later, Paul described Jesus’ death as the moment in which he ‘became a curse’ (Galatians 3:13). This is vivid language, but there are at least two senses in which it happened.

Firstly, he became accursed in a secular sense, as he was handed over to the curses of humanity. Crucifixion was not only designed to inflict enormous amounts of physical pain; it was also accompanied by words and actions that inflicted wounds at a deeper level.

Jesus was beaten and abused, his friends had scattered, fellow criminals heaped insults upon him, and passers by spewed forth mockery. That was the way it was set up: they were invited to curse him. It was part of the entertainment.

In this moment, Jesus became the focal point of the worst that humanity had to give. He was cursed by everyone who saw him.

But secondly, he became accursed in a religious sense. For the people who passed by not only considered him worthy of their curses, but in the words of Isaiah, they ‘considered him punished by God, stricken by him, and afflicted’ (Isaiah 53:4).

They weren’t wrong. The Old Testament contained laws about those who should be put to death for capital offenses, one of which states that, ‘anyone who is hung on a pole is under God’s curse’ (Deuteronomy 21:23). That seems to be the very thing Jesus is experiencing in this moment. If the curses of his fellow man were bearable, it was the curse from God that tipped him over the edge and elicited this cry of anguish: “My God, my God, why have you forsaken me?” (v46).

Something was happening to Jesus at this moment, as he absorbed the curse of both man and God. All the evil and brokenness of the world – every way in which we have failed to live up to the law of God and the life for which He created us – all of our sin was being located in the body of Christ. It became so consuming that Paul says that he who had no sin became sin for us (2 Corinthians 5:21). He who did not deserve to die on a tree became a curse for us (Galatians 3:13).

But Christ’s abandonment was not without purpose. It was part of a divine exchange, in which he was abandoned, so that we might be accepted. He took our death and gave us his life.

As Paul concludes: ‘God made him who had no sin to be sin for us, so that in him we might become the righteousness of God’ (2 Corinthians 5:21).

If you find yourself with extra time today, why not read these reflections on Isaiah 53: The Sheep and the Shepherd and Pierced for our Transgressions.